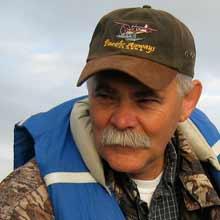 Research interests focus on the economic effects of air and water pollution, the implications of climate change for agriculture and water resources, and the tradeoffs between agricultural activity and environmental quality.