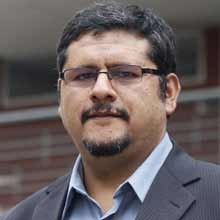 Roberto O. Valdivia graduated from the Universidad Nacional del Altiplano-Puno, Peru with a degree in Economic Sciences. He later pursued a Master of Science degree in Applied Economics at Montana State University and a PhD at Wageningen University in the Netherlands.  Roberto’s agricultural economics interest started when he was involved in projects funded by the International Development Research Centre-Canada in Bolivia. He then worked at the International Potato Center in Lima, Peru as a research assistant and consultant to several projects in the Andean region. In 1998 he began working for the Tradeoffs in Sustainable Agriculture Project funded by the U.S. Agency for International Development. He worked as a Research Associate in the Department of Agricultural Economics and Economics at Montana State University until 2011 when he started working for Oregon State University. Roberto’s main research focuses on international projects in Africa, Asia, Latin America and Europe and has been consultant to several agricultural research and development institutions such as FAO, Bill and Melinda Gates Foundation, IFAD and several CGIAR centers. He is now co-leader of the regional economics team of the Agricultural Modeling Improvement and Intercomparison Project (AgMIP, www.agmip.org) and co-leader of the Tradeoff Analysis Project. Current research interest includes analysis of agricultural production systems and Impact Assessment: Tradeoff analysis, assessing economic, environmental and social impacts of policy and technologies, as well as climate change impacts, adaptation and mitigation. Economics of terrestrial and geological carbon sequestration. Research focused on developed and developing countries.